Close agreements in half the time with SMASHDOCs 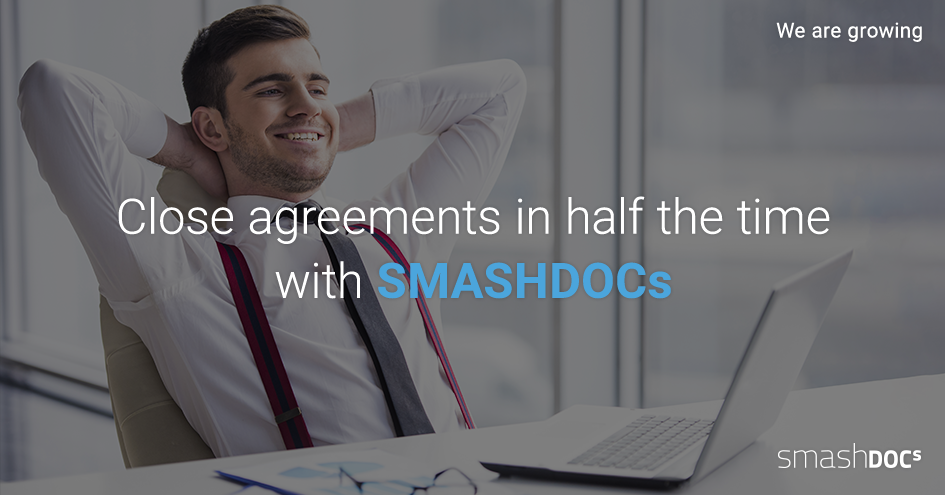 Agreements are complex projects in fact

An agreement is not merely a legal document with a signature – an agreement is far more. Every single page is the result of a time-consuming contention between multiple parties about the most beneficial clauses. The final version is the end of a long evolution of drafts and revisions – the compromise of all compromises from internal meetings and external negotiations. Countless cups of coffee were consumed during its production, meetings and dates were set and entire hard-drives worth of email sent. In short, a mature, negotiated contract is a demanding project. And many companies have to process a large number of projects of this kind…

The Herculean task for the teams of the contracting parties

Working on agreement projects is an Herculean task for the responsible staff members. Independent of the content. Whether a sales representative wishes to finalise a sales contract, a buyer drafts a large-volume framework agreement or a football sports director draws up the latest player licence agreement – they always face the same challenges: great need of coordination, countless versions and a wave of corrections. Including external lawyers, company legal counsels, specialist departments and superiors increases the complexity significantly. In sum, two negotiating teams face each other and have to consolidate quite different interests, both internally and vis-à-vis the other party. A task that does not only demand a sense of responsibility but also nerves of steel.

There is a whole range of digital aids for contract processing. These, however, usually only deal with partial aspects of an agreement project. So-called Document Assembly solutions simplify the creation of an initial draft with a questionnaire-based user guidance system. The Office programme Microsoft Word is generally also used. It has been serving as the tool for aligning contractual texts for decades – thanks to its change tracking and comments function. Exchanging different versions is then predominantly done via email. In some cases, document management systems such as Microsoft Sharepoint then take care of the versioning. And, finally, e-signing solutions ensure that a decreasing number of agreements need to be signed with a good-old Montblanc fountain pen. In the end, concluded agreements are then filed away in the archive of a contract management system. All in all, this results in a medley of tools and media – without interfaces. Insular solutions that may be digital but that are outdated in their methodology. That is especially true in the case of Word – a text programme that stems from the eighties. A decade in which phonebooths were prevalent and bank transfers had to be filled out by hand.

SMASHDOCs combines all work steps in one single solution

Hence the time has come to beam contract creation into the 21st century. Toppan Merrill GmbH, a Munich-based IT company, has developed a solution that brings together all those involved on a central platform. The entire project cycle – from the first draft to the digital signature and transfer to a contract management system – is web-based. It can therefore be used at any time and anywhere in the world.

A completely new word processing system that goes far beyond the capabilities of Word lies at the heart of the application. The smart version control with section-by-section versioning simplifies the work process and makes things more manageable. The usual flood of document versions is eliminated. An extra level of transparency is added to this: At any time, every authorised user in a team can track which suggested changes were made when, by whom and how decisions came about. The intelligent change tracking ensures that the involved contributors will no longer miss or overlook any changes that are made. It automatically notifies all team members about documents that are subject to any new developments. ‘Adaptive redlining’ visually highlights all changes and comments that are new for the respective viewer. A comments feature allows for discussions to be had about the agreement’s content in real-time, and, if need be, even between selected users. Thus sending coordinating emails back and forth is a thing of the past.

Hence ‘SMASHDOCs for agreement projects’ does so many things differently. This is the case from the first to the last day of the agreement project. The smart document template already provides assistance when preparing the draft agreement. An intelligent questionnaire asks the right questions and takes the specific company specifications into account. The employees are then assigned to the agreement project and receive individually adjustable reading, commenting or approving functions. The distribution of rights and roles can be custom-defined for each agreement project and can also be easily adjusted throughout the project. All actions such as change suggestions, decisions and comments are automatically logged in an audit-proof manner. Thus, agreement work is not only made easier but also safer.

Typically, the toughest nut to crack is the negotiations with the other party. Even the best software cannot make the other side more sympathetic – but an online document can at least make the coordination process easier. Even when the negotiating partners are old-fashioned and insist on a Word document, SMASHDOCs finds a solution. The contractual document can be exported as a Word file with a single click. If the negotiating partner changes anything in the file, the amended version can simply be re-imported. SMASHDOCs recognises any and all changes made to the content as well as new comments. These are then logged in the online document in a revision-proof manner. In the next step, SMASHDOCs then notifies all collaborators of anything new by highlighting these points visually. Painstaking, manual comparison of versions thereby becomes a thing of the past.

A legally compliant, digital signature can be added directly in the online agreement – without an additional e-signing software. In a final step, the digitally signed agreement is then archived as a PDF together with the entire, clearly arranged documentation. Metadata, such as the contract start, prices or wire information can be easily marked in the online document so that the contract can be created without further manual effort in a contract management system and set up as a self-executing ‘Smart Contract’.

For all industries and company sizes

‘SMASHDOCs for agreement projects’ is an industry-independent solution. It is equally of interest to real estate developers as well as football clubs and industrial companies. The decisive criterion is not the size of the company, but the nature of the agreement projects. The SMASHDOCs solution particularly unfolds its advantage in the case of agreements requiring intensive coordination and negotiation. The great efficiency is also a great asset when handling a large volume of standardised agreements.

The company’s IT infrastructure is not decisive when it comes to using the cloud-based SMASHDOCs solution. SMASHDOCs can be used at any time and anywhere. The data are stored on high-performance cloud servers – exclusively located in German data centres with the highest IT security requirements. Users intending on operating the solution on-premises simply install SMASHDOCs on their own company server.

Anyone seeking to work with modern, web-based workflow tools can no longer avoid SMASHDOCs in the world of agreements. The solution for agreements projects is so appealing because, first and foremost, it reliably relieves the company’s legal staff and makes teams more productive. Here, digital progress mainly benefits the time balance and accelerates agreement work by up to 50 per cent. These dimensions can only be achieved because SMASHDOCs is not an insular solution. Instead, it offers a smart way to simplify the complexity of agreement projects. This is the next step of digitalisation in the world of agreements.