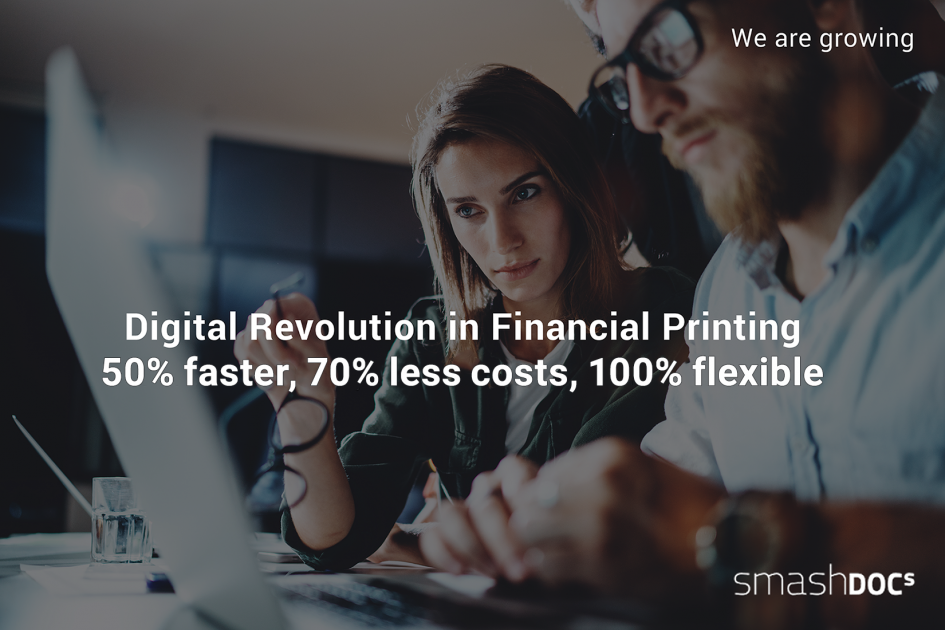 Issuers, lawyers and bank employees can hardly believe it: They can now produce securities prospectuses without much effort. Ready-to-print, in a perfect layout, and at a fraction of the cost. Including unlimited changes and proofs without extra fees. But how can that work without a specialised financial printer?

Financial printers are companies that convert a prepared prospectus text including tables and graphics into a professional layout. In that process, the financial printer manually translates page by page into their layout programme. Once the first draft is complete, it is submitted to the regulatory body. Yet only then does the actual work begin: loops and loops and loops of changes. Each correction is a cumbersome effort as it is amended in the set document and then returned for approval. For liability reasons, each and every amending step must be documented without gaps. So-called blacklining, strikethrough and cumulative proofs as well as ‘global searches’ are indispensable intermediate steps in editing. These all generate additional work for the financial printer, work for which they charge a princely fee.

Anyone who publishes a securities prospectus has to expect considerable costs. After all, financial printers are specialists who charge horrendous sums for their supposedly exclusive know-how. Fees reaching up to EUR 250,000 are not uncommon. For the initial layout of a securities prospectus, an issuer can typically expect EUR 30 per page. Hence, a 400-page financial prospectus quickly amounts to EUR 12,000 just for the initial layout. Each subsequent correction in the text is also charged per page, even if only a comma is changed. The consequence: The costs promptly skyrocket, as there are more than enough change loops. Regulatory authorities and compliance requirements demand multiple comparative and change versions, each of which is produced manually and – this should come as no surprise – billed by page. Since work is typically completed under the pressure of deadlines, weekend and night surcharges lead to the ultimate explosion in costs. Anyone who wants to produce a professional financial prospectus that conforms with the law is thus caught in the financial printer’s cost trap – until now.

The only alternative so far has been to do without a professional layout and to create the prospectus oneself using Microsoft WORD. This, however, comes with considerable compliance risks due to potentially incorrect change tracking and missing change versions as well as significantly increased organisational efforts. Not really an alternative.

SMASHDOCs Financial Printing: up to 70 per cent lower costs

‘Issuers, lawyers and banks can finally breathe a sigh of relief,’ promises Christian Marchsreiter, inventor of SMASHDOCs Financial Printing. With his online word processing platform, Marchsreiter is taking on established financial printers. ‘Our solution saves the publishers of security prospectuses and financial documents roughly 70 per cent in costs. In addition, the processing times are about 50 per cent shorter compared to working with a financial printer’.

The solution simplifies and accelerates the production of securities prospectuses in all areas. All manual, high-cost work steps are made superfluous since changes are automatically traces and can thus be logged. The number of pages and change loops do not play a role here when it comes to the costs. Any number of proofs and correction copies can be created by the user at any time. However, automation has another “pleasant side effect” – many previous sources of error are simply eliminated.

Financial Printing has never been this flexible

SMASHDOCs enables issuers, their banks and law firms to create, manage and publish financial prospectuses themselves. Entirely independently of external service providers. In-house staff can generate a perfectly designed version for submission in just a few clicks. They can also produce any number of correction copies. They can even create black-lining, cumulative or strikethrough proofs internally with a single click. All changes are automatically logged 100 per cent audit-proof. The compatibility with Microsoft Word ensures that all participants working offline are also seamlessly integrated into the web-based coordination process. This way, for example, initial draft versions can be imported into SMASHDOCs from Word and vice-versa.

The highly scalable platform uses state-of-the-art digital technology and brings Financial Printing out of the cost trap for good. The system has already proven itself, among other things, in the legally compliant processing of contracts and in the production of financial and business reports. Renowned companies such as the legal firm Wolters Kluwer, the Holzbrinck Publishing Group or the German Pension Insurance already use SMASHDOCs solutions in a wide range of areas. Financial Printing is simply the next logical step.